Nourishing Our Country in 17 Locations.

A new cool-room and freezer were added to food rescue ops, thanks to funding from the ACT Government’s ‘Innovation Grants’, the generous support of the Snow Foundation and Canberra Airport Group. We also received over $60,000 from staff, player and community fundraising as ‘Charity of the Year’ for the Vikings Group.

Cooking for a Cause has become a regular and well-loved feature through a partnership with CC Cares at Canberra College and the NEST team are kept very busy running nutrition and sustainability workshops across the community.

I have finally found nutritional meals that my 11 year old son loves!

The arrival of two brand new Iveco vans brings the Newcastle ﬂeet to three and thanks to the bigger vans, more food can be rescued for those in need. The vans were ‘christened’ with the help of Ronni and Rachel Lodding from NAB in August last year.

Five fabulous chefs donated their precious time to produce a superb meal that raised over $100,000 at the OzHarvest Newcastle Fundraising Lunch. Curated with love by the fabulous Neil Slater.

$10,000 was raised by a local hotel through their ‘Skip the Line’ initiative, where customers can donate to a charity and get priority entry. The true commitment of what it takes to be an OzHarvest volunteer was put to the test as they walked the line every night in a banana suit collecting donations!

In true Newcastle style we hosted ﬁve Bunnings Sausage Sizzles – all on the same day! A truly awesome effort by staff and volunteers as $4,800 was raised.

Thank you for letting the school kids get involved and explaining to them where our food is going and how it can help other people. 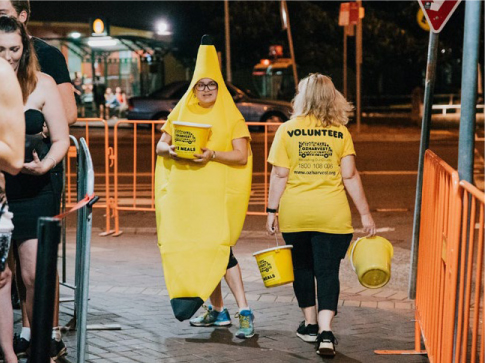 The OzHarvest Market has a new lease of life, thanks to TOGA Property Group helping to keep the doors open until November 2019.

Four primary schools in the Greater Sydney region took part in the pilot phase of FEAST with huge success, with many others interested in the NSW roll out planned for 2019.

The most successful OzHarvest CEO CookOff took place at the Royal Hall of Industries, which saw over $2 Million in funds raised and 1,400 guests served on the night by over 200 top Australian business leaders and 50 talented chefs.

The premiere of independent ﬁlm Food Fighter took place at the State Theatre, bringing together supporters of OzHarvest and food waste prevention alike. The premiere ignited conversation around how we can all be part of the solution to reduce food waste, launching OzHarvest’s campaign ‘Fight Food Waste’.

Due to increased demand from agencies in the Illawarra region, a new and much needed run has been introduced to help service local communities in Wollongong.

OzHarvest is helping to provide local solutions to food insecurity by improving access to a wide range of fresh and healthy food for the most vulnerable people in the Illawarra region. 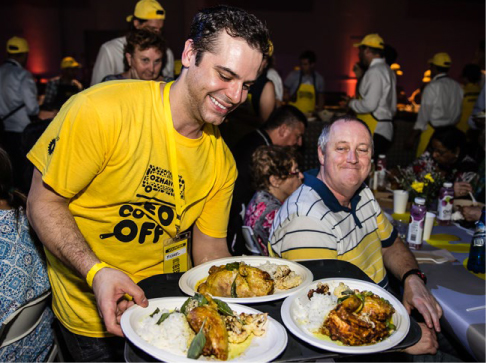 Without OzHarvest food we could not cook the thousands of meals for our young people. 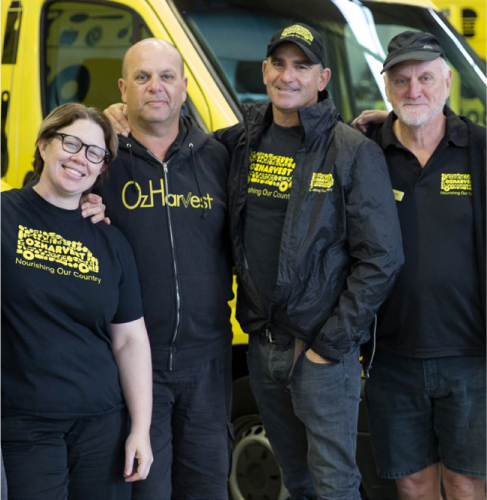 OzHarvest Cairns jumped to a new level this year, with a brand new refrigerated van thanks to Queensland State Government Dignity First Fund.

Our long-standing food donor Rusty’s Markets donated their 100th tonne of rescued food and we hosted a pop-up OzHarvest Market on the Cairns Esplanade to educate consumers about preventing food waste.

We get to work in a fun-filled supportive environment full of passionate people committed to reducing food waste and see the positive impact on people’s lives in the Cairns community. 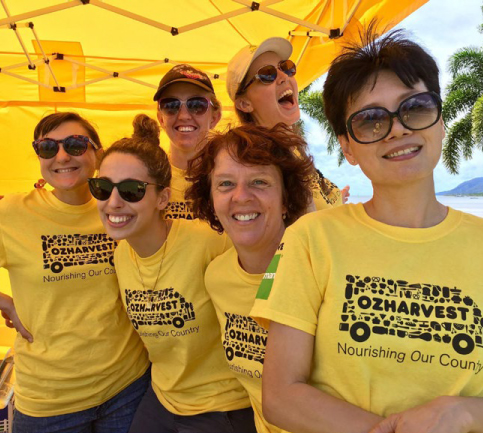 Thanks to the Commonwealth Games, OzHarvest Gold Coast experienced a record food rescue month in April 2018 with over 65,000 kgs of fresh fruit and veg, milk, yogurt, cereals, bread, frozen meals and assorted snacks donated from the athlete’s village.

Thanks to Ruth Tate for the very generous donation of $50,000 raised at the Mayoress Ball earlier in the year, which helps to support our local food rescue activities.

A new Iveco van -Izzy- joined the ﬂeet thanks to funds raised from the Woolworths Christmas Appeal. We now have 3 vans supporting the Gold Coast.

Without Ronni and OzHarvest, we wouldn’t be able to feed over 400 people in need each week! 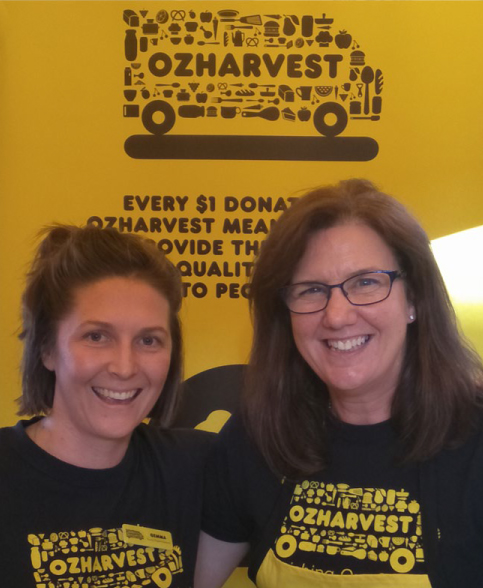 2017’s Great Food Rescue Race raised over $60,000 for OzHarvest Adelaide. A great achievement and group effort from our amazing team and volunteers. Our “Angel” donor Melissa arrived unannounced for the sixth year in a row. Donating over $16,000 from her family trust, she has donated more than $75,000 over six years

OzHarvest supporters never fail to come up with new ways to fundraise. Connexion Alliance raised nearly $12,000 by cashing in used cans and bottles from their worksites around the Bowder warehouse.

“Lily” the latest yellow van joined our ﬂeet, thanks to our generous donor Tim Ryan.

I cooked a roast the other night, which fed six of us–everything came from OzHarvest, the meat, vegetables and even the gravy! I now eat better than I have in years. 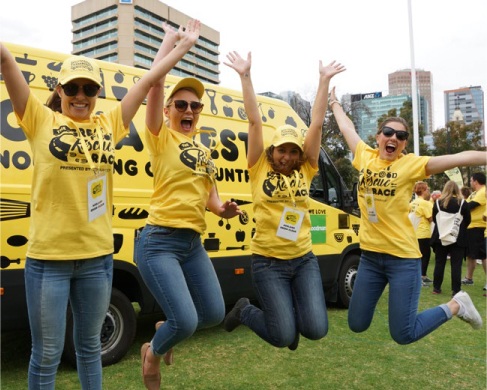 The team at OzHarvest Melbourne reached the ﬁve million meal milestone delivering to people in need in the greater Melbourne area since inception in 2014.

Cooking for a Cause took off this year, as we hosted over 100 sessions in the Melbourne kitchens- more than double the amount from last year.

Thanks to 27 new Woolworths stores coming on board, we are reaching more people through an additional 29 charities and regular food rescue has been extended to include the Mornington and Cranbourne areas.

A fundraising dinner at Red Spice Road marked the end of a fantastic ﬁnancial year, raising over $7,000.

My husband has been sick and unable to work for two years, we use every single food item given to us and I adjust our meal plans depending on what we receive. We appreciate the OzHarvest food hampers so much! 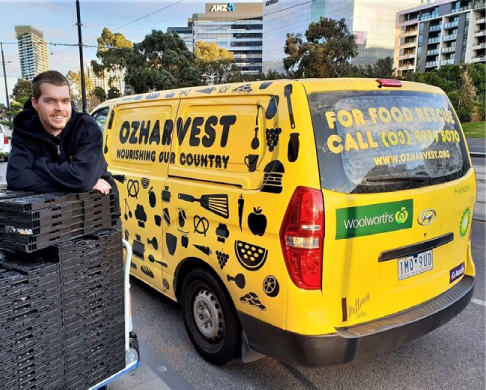 OzHarvest WA celebrated a major milestone, rescuing two million kilograms of good quality surplus food since inception in December 2014 – an incredible team effort achieved in less than 3.5 years! Ronni ﬂew in to help us celebrate our successes and achievements at our 3rd birthday barbecue breakfast, which allowed us to thank all our wonderful OzHarvest volunteers.

Andrew ‘Chappy’ Chapman, one of OzHarvest WA’s founding members topped the leader board at the CEO CookOff, raising a massive $300,000. His efforts were a signiﬁcant contribution to reaching the $2million goal for the event.

I’m often stopped by people wanting to express their gratitude for the work of OzHarvest. One exchange will never leave me, as a frail elderly couple collected a box of rescued groceries, we exchanged smiles and their gentle nod of gratitude is imprinted on my heart. 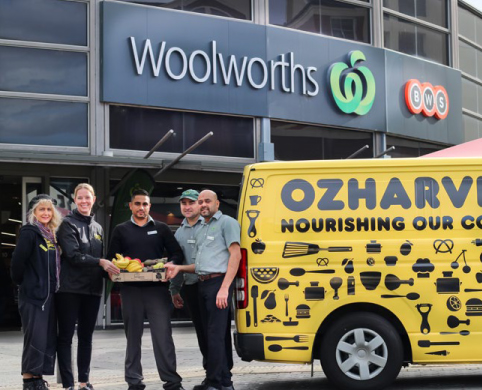 Our regional chapters are run by wonderful teams of volunteers who donate their precious time rescuing good quality produce from local food donors and delivering to nearby charities.

As our teams have grown, so has the positive impact we are making to reduce food waste and hunger in regional communities.

Without the strong support of our community, local food donors and amazing volunteers, OzHarvest Sunshine Coast would not be the success it is today.